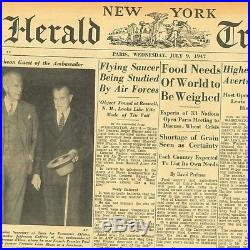 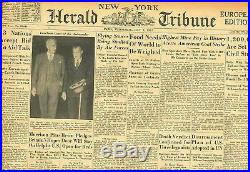 Original New York herald Tribune. Object Found Roswell New Mexico Flying Saucer Studied by Air Force. Looks like a Kite made of Tin Foil. Days after something shiny crashed in the New Mexico desert, the Roswell Army Air Field issues a press release that says the military has recovered the remains of a flying disc. Although quickly discounted as erroneous, the announcement lays the groundwork for one of the most enduring UFO stories of all time. “The many rumors regarding the flying disc became a reality yesterday when the intelligence office of the 509th Bomb Group of the Eighth Air Force, Roswell Army Air Field, was fortunate enough to gain possession of a disc through the cooperation of one of the local ranchers and the sheriff’s office of Chaves County, ” the press release read. The flying object landed on a ranch near Roswell sometime last week. Marcel of the 509th Bomb Group Intelligence Office. Action was immediately taken and the disc was picked up at the rancher’s home. It was inspected at the Roswell Army Air Field and subsequently loaned by Major Marcel to higher headquarters. Headlined the story “RAAF Captures Flying Saucer on Ranch in Roswell Region, ” providing a historical artifact that, in retrospect, seems ready-made for fueling an episode of. But press accounts the following day told a much more mundane story: The military had determined the recovered debris to be the wreckage of a weather balloon and related equipment. No flying saucer a term that had just been coined by newspapers to describe the first widely publicized UFO sighting had been found. Dummies like these, dropped from balloons during tests, spawned stories of alien corpses, the military says. While the down-to-earth explanation seemed to settle the issue, the so-called Roswell incident flashed back into the public consciousness three decades later. New interviews with individuals proffering information about the crash, and the 1980 publication of Charles Berlitz’s book. Breathed new life into the story, turning Roswell into a rallying cry for ufologists and true believers. Rumors of recovered extraterrestrial bodies and a government cover up gained such a foothold in popular culture that the U. Government took the unusual step of producing two reports in the 1990s that set out to put the matter to rest. In assembling the massive reports, the Air Force gathered and declassified many documents relating to the Roswell incident. Weighing in at nearly 1,000 pages, The Roswell Report Fact v Fiction in the New Mexico Desert, published in 1994, set out to tell the Congress, and the American people. The Air Force knew about the Roswell claims. The second government publication, 1997’s The Roswell Report Case Closed, came just days shy of the Roswell incident’s 50th anniversary. The report said eyewitness accounts tied to the 1947 recovery actually occurred years later, becoming tangled up in time and further strengthening the Roswell incident’s hold on the public’s imagination. “Air Force activities which occurred over a period of many years have been consolidated and are now represented to have occurred in two or three days in July 1947, ” the report said.’Aliens’ observed in the New Mexico desert were actually anthropomorphic test dummies that were carried aloft by U. Air Force high-altitude balloons for scientific research. Despite the military’s assertion that the Roswell incident was a side effect of Cold War secrecy and sci-fi fantasies, the story retains a vital spot in UFO lore. The town of Roswell has turned into a tourist destination, hosting the International UFO Museum and research center and an annual Roswell UFO Festival. The item “Roswell UFO Found. Flying Saucer Studied by Air Force July 9 1947 B28″ is in sale since Tuesday, November 27, 2018. This item is in the category “Collectibles\Science Fiction & Horror\UFOs, Area 51, Roswell”. The seller is “historicnews70″ and is located in Newton Stewart. This item can be shipped worldwide.