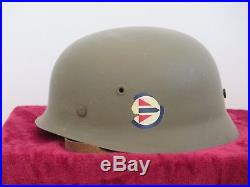 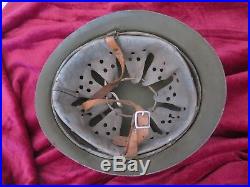 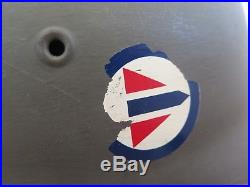 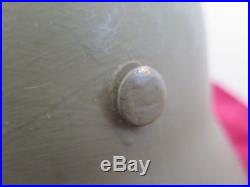 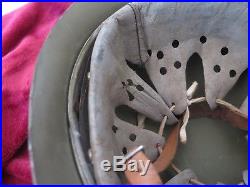 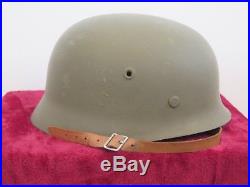 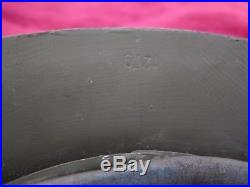 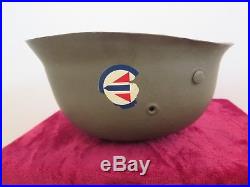 Norwegian Airforce AA Reissue of M40 German Steel Helmet. Many Nazi helmets were left over across Norway at the close of WW2 and reissued then to the Norwegian Home Guard. Who happened to repaint and apply classic decals to the side of their helmets. That type of helmet was relatively common, but much less these days as they disappear into collections or also because in previous decades the ill-informed would strip them looking for decals. Result: Good Norwegian helmets are becoming hard to find. However, this one is in a different class: A truly rare Anti-Aircraft Unit cut-down M40. This piece has a Norwegian chin strap and German liner, re-dyed light grey by the Norwegians, in addition to serial numbers to rear of skirt. Was rather dusty from storage when I got it. Guaranteed original, not some put together. From an old Norwegian collection. The most interesting feature is the rim and peak was cut down by the Norwegian government in the immediate post-war period, when AA units where using German Flak AA guns. The idea was to improve visibility upwards whilst wearing the helmet, reversed, with no impediment to the nape of the neck. Overall effect is that of a Fallschirmjager helmet, with ordinary liner. Very rare and nice item. Bought in Norway many years ago. The item “M40 Stahlhelm HELMET AIRFORCE NORWAY Anti-Aircraft Reissue RARE” is in sale since Saturday, July 28, 2018. This item is in the category “Collectables\Militaria\World War II (1939-1945)\Field Gear”. The seller is “redfell44″ and is located in Hove, East Sussex. This item can be shipped worldwide.