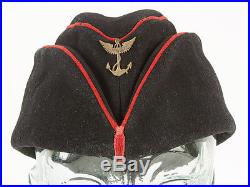 Books, Maps and Photographs. China, Ceramics and Glass. Tel: +44 (0) 1752 221443, or visit us at: Parade Antiques, 27 New Street, Barbican, Plymouth, PL1 2NB. WWI Imperial Russian Naval Air Force Overseas Cap. An extremely rare overseas cap for an aviator in the Imperial Russian Navy dated 1916. Information about naval aviation in Imperial Russia is understandably sparse, but records exist concerning Dimitry Grigorovich’s construction of several “M-type” flying boats for the Baltic Fleet in 1913. The cap has the Winged Anchor badge of the Imperial Russian Naval Airforce and on the inside bears the maker’s details, a faint depiction of the Tsarist Eagle and the date of 1916 (just a year before the Revolution). The cap came from a world-renowned collection of military headgear belonging to Robby Wilson. The collection is widely regarded as the largest of its kind and led to the formation of the Robby Wilson Foundation in 2008. A non-profit organisation dedicated to acquiring, authenticating and disseminating rare examples of headgear via a virtual museum. The cap is large in size; we believe either 58 or 59. Its condition is excellent, with some slight age-related wear. Size: 29 x 10.5 x 4 Weight: 188g. _gsrx_vers_566 GS 6.7.1 (566). The item “Robbie Wilson Collection WWI Imperial Russian Naval Air Force Overseas Cap” is in sale since Monday, May 19, 2014. This item is in the category “Collectables\Militaria\World War I (1914-1918)\Helmets/ Hats”. The seller is “paradeantiques_online” and is located in Plymouth. This item can be shipped worldwide.