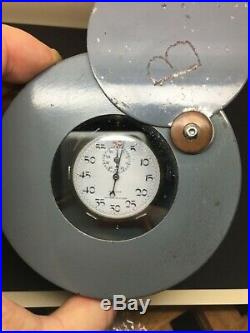 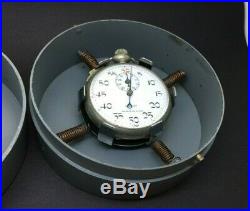 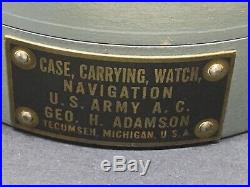 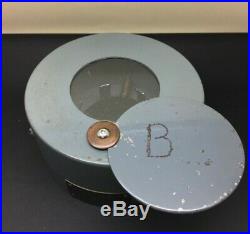 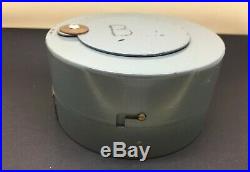 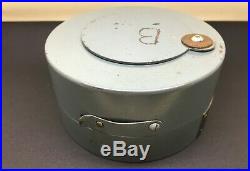 A very rare and unusual WW2 US Airforce (Army Air Corp) Armoured Bomb Timer Holder for holding a Type 23 Military Timer. These cases were carried inside the cabin of a B-17 or B-24 and. Would have held a USAAF watch timer such as a Hamilton, Waltham or Elgin Model 23 Watch that was used to be the main timer for bomb missions and removed for calibration after every mission. It was extremely important to have a working timer at all times for accurate timing of flights and distances to objectives which were often not easily seen from the air, to synchronize watches of the crew and other aircraft and to manage fuel and range. Every American heavy bomber would have had one of these and it holds the watch using springs (like the old radio microphones) to prevent damage from shock / flak etc. And so it could be read when the plane and crew was bouncing around. The case is armoured and has a sliding round disc to cover the glass viewing hole. It is a very heavy and solid armoured item. Measures 100mm diameter and 50mm high. Concisely described on the brass plate in USAAF parlance : “Case, Carrying, Watch, Navigation, US Army AC”. Adamson, Tecumseh, Michigan, USA. Hand marked with a large letter “B” on top, presumably so one could be told from another by maintenance crew for identification for servicing. Pictured with a WW2 Era stopwatch that is NOT PART OF THE SALE but shown only to illustrate how a watch would have been held in the holder. A bit more expensive because it is heavy. The item “Unusual WW2 USAAF US Airforce Bomber Armoured Holder for Hamilton Model 23 Watch” is in sale since Tuesday, March 26, 2019. This item is in the category “Jewellery & Watches\Watches, Parts & Accessories\Wristwatches”. The seller is “waterrat-123″ and is located in London. This item can be shipped to United Kingdom, Austria, Belgium, Cyprus, Denmark, Finland, France, Germany, Ireland, Luxembourg, Malta, Netherlands, Poland, Spain, Canada, Japan, New Zealand, China, Israel, Hong Kong, Norway, Malaysia, Singapore, South Korea, Bangladesh, Bermuda, Bolivia, Guernsey, Gibraltar, French guiana, Iceland, Jersey, Jordan, Liechtenstein, Sri lanka, Monaco, Maldives, Oman, Pakistan, Paraguay, Saudi arabia, United arab emirates, Chile, United States.