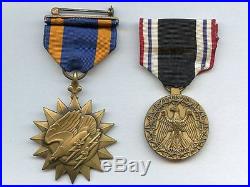 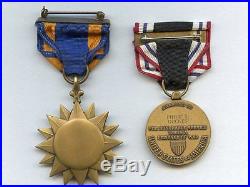 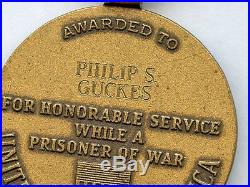 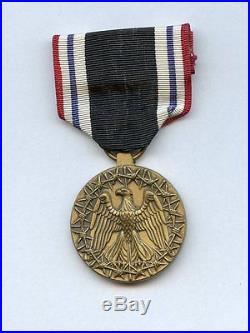 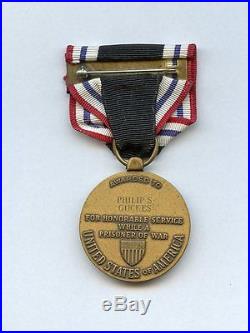 Here is a medal pair that I had squirreled away long ago and it just surfaced as I was looking for something else. WWII Prisoner of War Medal officially named to PHILIP S. GUCKES and a nice WWII issue wrap brooch Air Medal (unnamed as issued). I got this long before I had access to Ancestry, so had never researched it. Well, I just spent half an hour on that and the research attempt was quite fruitful. I found a lot with Philip S. Guckes and even more by dropping the middle initial and using Google. Guckes was born 6 January 1920 in Pennsylvania and died 8 June 2006 in Florida. Before entering the service in 1943, he attended Lehigh University, where he was the President of Phi Sigma Kappa fraternity. His service number was 0-2057910. He was captured as a First Lieutenant on 28 December 1944 while flying in a heavy bomber over Italy. He was held as a German POW for 166 days at Stalag Luft 1. He was assigned to North 3, Barracks 1, Block 301, Room 3 you can find the details of his room mates, etc. I did not find his specific bomb squadron, but someone probably do that, along with the POW report and aircraft loss paperwork. Believe me, genuine named POW medals are hard to find – I think I have had only three, most still being with the families. NO OVERSEAS SALES, U. PAY PAL is preferred, please. Box 1136, Alfred, NY 14802. Long out of print and one of the most popular of the WWII battleships. Most famous for the Japanese surrender on her decks in Tokyo Bay. The item “INTERESTING WWII AIR FORCE POW MEDAL (NAMED) & AIR MEDAL RESEARCHED, SCARCE” is in sale since Wednesday, February 17, 2016. This item is in the category “Collectibles\Militaria\WW II (1939-45)\Original Period Items\United States\Medals & Ribbons”. The seller is “gbhmedals” and is located in Alfred, New York. This item can be shipped to United States.